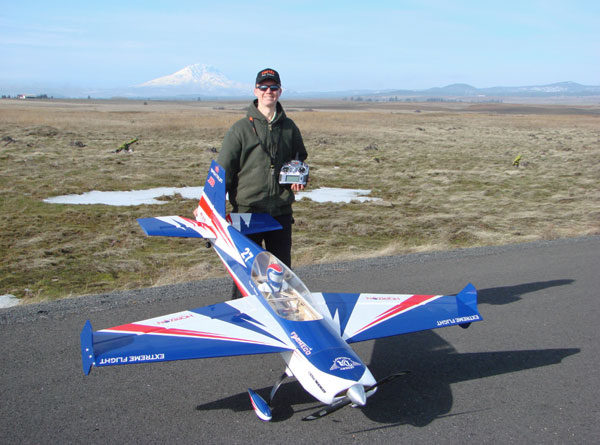 We recently received this email from Team Extreme pilot Daniel Holman. Daniel is one of the most talented RC pilots I have ever met and a true gentleman and ambassador for the hobby. Daniel writes: "My 91" Extra 300EXP is powered by a DA-60 on a KS-1060 pipe turning a Vess 24B Stealth propeller which provides excellent power in 3D as well as high-speed aerobatics. I am running JR 8711HVs on the elevators and rudder, JR MP-82T's on the ailerons, and a JR 8917HV on the throttle. Everything is guided by my Spektrum DX-18 transmitter and a Spektrum AR-9110 PowerSafe DSMX receiver. Receiver power is provided by a pair of Fromeco 2,600mah Li-ion batteries with a Fromeco DC-Up MKII to keep the amperage up during the most demanding loads. This airplane is the epitome of EXTREME and is the most capable giant scale airplane that I have flown. It feels like a giant foamy with insane control authority through all 3D maneuvers, is exceptional for XA (Extreme Aerobatics) type flying, and still flies sequences better than many 35% airplanes. Extreme Flight has done an outstanding job producing what is, in my honest opinion, the best 3D/XA/IMAC hybrid airplane in production!" - Daniel Holman
Previous Post
Next Post
Quick View