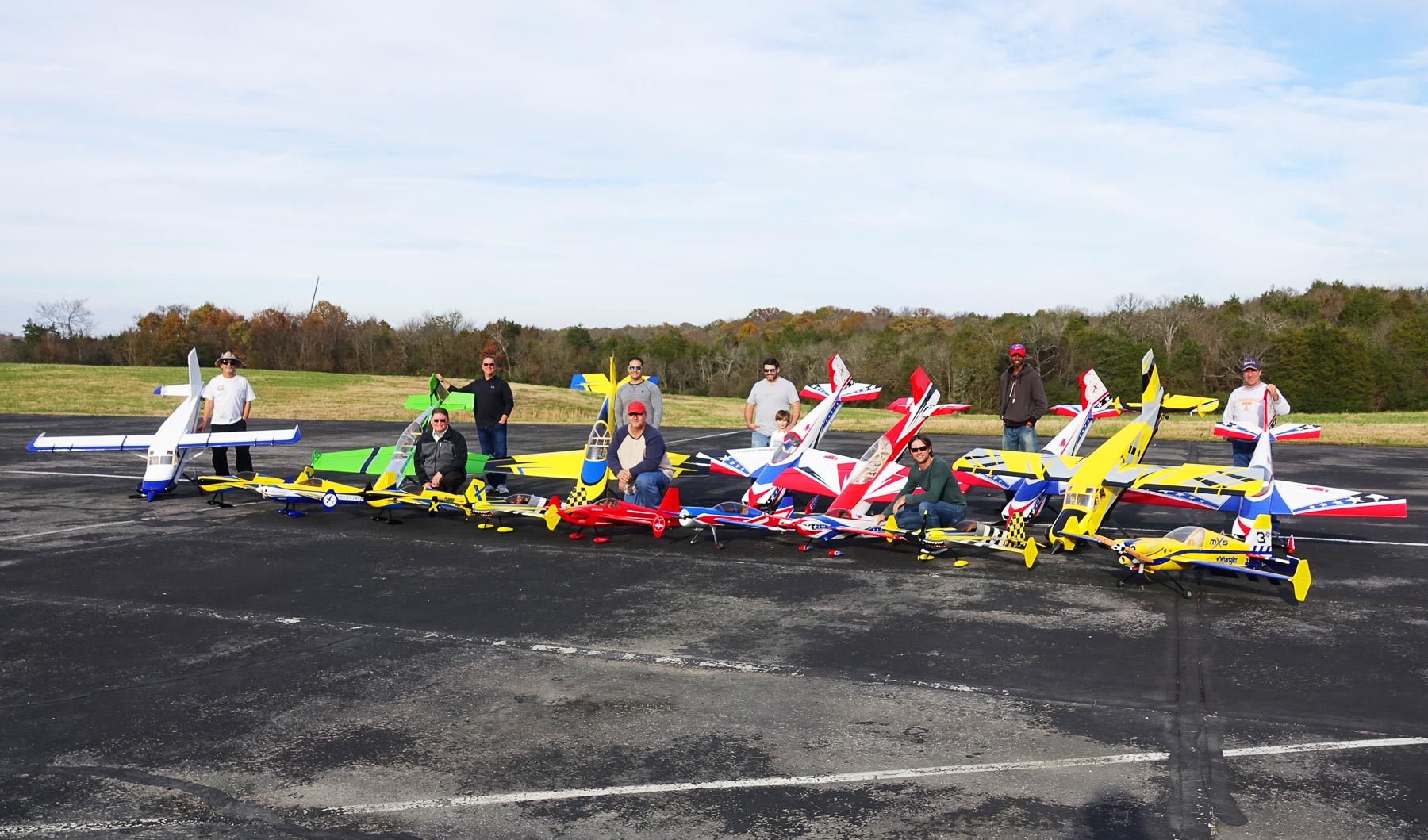 Early Sunday morning, November 18, 2018 Mark Czechalien and I loaded up and hit the road bound for Nashville TN to spend the day flying with some of our closest buddies in the hobby.

Brother Richard Hummel put out the word that a group of Nashville area 3D fanatics were getting together for an informal day of hucking and fellowship and sent an invite our way. The weather was forecast to be beautiful (indeed it was!) so how could we turn it down?

The Music City Flyers operate out of Cane Ridge Park just this side of Nashville and have an excellent flying facility. We arrived mid-morning to find an enthusiastic group of locals assembling planes and getting ready for a full day of flying. Mark and I followed suit and soon had our birds ready for flight. I was thrilled to see Extreme Flight models everywhere! Although I've been at this for 17 years it is still moving to show up at a flying field and see folks enjoying the models that we created. It never gets old! 3D whiz kid Alex Barron just happened to be in Nashville for the weekend and joined us bringing out his Extreme Flight 91" Laser EXP. Down here in the South Alex's name is well known in 3D circles and he certainly wowed everyone in attendance. I handed him my transmitter and let him have his first pull on the new 104" Laser. Alex was all smiles and proclaimed he'd be getting a 104" Laser as soon as the next shipment arrived. He also flew the 120 inch Bushmaster several times and instantly realized what all the buzz surrounding this model is about.


Mark Czechalien brought his new DA-120cc powered Slick 580 and spent the first couple of flights getting it dialed in. He and Alex put it through its paces and soon had it on the deck flying super aggressive maneuvers. It was easy to see Mark was getting really comfortable with the Slick by day's end as each successive flight got lower and more aggressive. The Slick thrives in this environment!

Richard Hummel had an unfortunate incident a few weeks back in Lafayette at the Cajun Huckfest and lost his new 92" 3DHS Edge 540. We encouraged Richard to try a 91" Extra 300EXP this time since he'd never had an Extra. I'm happy to report that Richard is completely in love with his new Extra and the confidence it inspires allowed him to get in the groove instantly. Looking good Richard! Thanks for giving me some stick time on the Extra, still one of my all time favorites! Alex got a hold of it as well and showed Richard just what is was capable of.


One of Nashville's hottest guitar pickers Tony Pierce joined us and proceeded to flog his 60" Laser into submission. Tony is a great guy and one heck of a builder. He does custom work for a lot of Nashville area flyers including custom color schemes and repairs. This guy is good! He also makes some awesome wing and fuselage protective travel bags. Look him up on Facebook and check these things out, they are SWEET! And if you get the opportunity to see him and his wife perform, don't pass it up! Two of the most talented folks in Nashville! Check out their website: www.pierceavenue.com and Facebook page: https://www.facebook.com/pierceavemusic/

TN Local and good buddy Tim Dewitt (a.k.a. Arkole Blake) was in attendance with his 120" Bushmaster and was having a ball until he clipped the end of the runway and broke his prop and spinner (it happens to the best of us). Tim hung with us for the rest of the day however and as always we enjoyed his company.


We wrapped up just before dark and several of us convened at a local restaurant for a wonderful dinner before going our separate ways. Mark dropped me off at home around 11:30 pm which ended a great day of flying and camaraderie.

A huge thanks to the Music City Flyers for allowing us to visit your flying facility and showing us a great time! It was great to meet all of you and share our passion for this great hobby!


P.S.- Please do your part to keep this great hobby alive, take a kid flying!