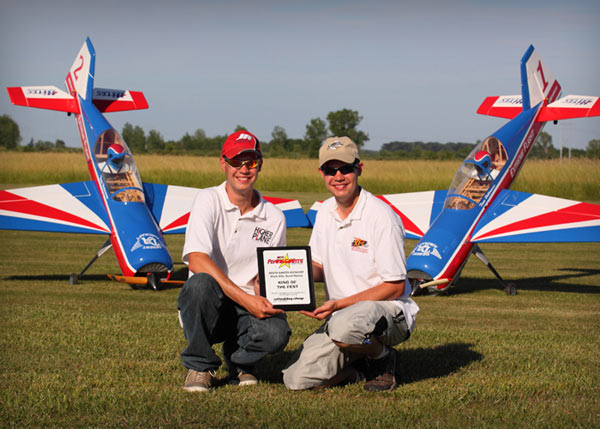 Hi Extreme Flight! We thought it would be a good idea to send you some pictures of the recent fun and success with our Extreme Flight Planes! The first picture is from the 2011 Black Hills Huckfest. Ross and I were voted as "Kings of the Fest". The second photo is of me hovering the 110" Yak after I won "3D Throwdown Champion" at the Huckfest. There were six other pilots (including Ross). We both flew the 110" Yaks for the competition, and they mentioned the difference between me and my brother was one tenth of a point! We know the planes helped with success! They present very well, especially when we fly them together. The other pictures are from our homefield funfly in Paynesville, Minnesota. We got four inches of rain the night before so the field was slightly flooded, but we made the best of it! That's me wearing the knee-high boots hovering the 88" Yak. The picture with the three 48" EXP's is of Ross (The right Extra) our friend Jeremiah Hausauer (The left Extra) and myself with the MXS. The final pictures are of Ross hovering "Number 2" over the flooded field. Thank you for the amazing planes and customer service! The planes are a hit no matter where we bring them, and they last forever! The 88" Yak is at least 5 years old and has a ridiculous amount of flights on it, but it just keeps on going! Thanks again, Paul Hollermann
Previous Post
Next Post
Quick View